Play is experimenting with chance 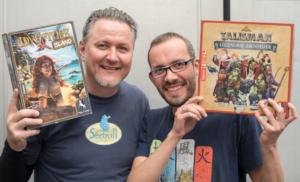 From the contributions to the game of 2019 you probably can see that me games of any kind are fascinating. I am a strategist, a gambler, a card, casual, a Gamer. These Hobbies I share, apparently, with a lot of people, which emerged just 2019, more and more. The major bookstores carry many titles from the area of the card, roles, and strategy games. And also the Comic and game shops seem to celebrate a kind of Comeback. So it is not surprising, if the operators of game shops games at the same time-inventor. A good example is Michael Palm, the some know from the “Seetroll” is here. Together with Lukas Zach, he forms a Team that has done Excellent. The two have managed to establish Aventuria outside of the traditional Pen & Paper.

Then be sure read the INTERVIEW, the Nottel for you has led!