14. March is finally over and the “free role round” will be held. It is a decentralised Event, which is to make our Hobby even more well-known. Furthermore, there is the possibility of the box to look, because you can try out in the participating localities, especially new role-playing games. Find it in in addition, an ideal opportunity to role-players*meet you in your Region, or new player groups. The appropriate locations to find it on the official Website of the organizers. Pre-registration is not generally necessary, therefore, you can participate also decide spontaneously.

For this special day have put so many publishers on the stuff. System Matters presented, for example, the beginners guide, what are the newbies the first steps in the Pen-and-Paper area a little easier to do. Through movement, we obtain a beautiful glimpse of Runequest , or in the role-playing game world of Glorantha. People who like to play “The black cat”, will be on the 14. March may Katzulhu test. Positive in the sense of the Community-idea is that many small publishers have worked with the almanac to create a kind of anthology, of the various adventures and game AIDS contains. This includes a sliver of the moon adventure, which is the title of The legacy carries. Also Orkenspalter TV is committed to the Event and introduced me to the photo of the materials available. In this Video set, all folders of the GRT in detail before. 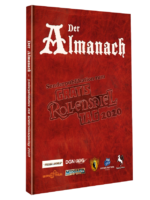 Although DSA in the strict sense does not occur in the context of the free-to-play materials, it was important for us, for the 14. To advertise in March, because hardly anything Nanduriaten is more than the liveliness of the Pen-and-Paper scene. Without offspring, our “Hobby would die out” at some point, and it doesn’t sound like a nice scenario. Therefore, we wish all the people who participate, a lot of fun at the coming role-playing game on Saturday.