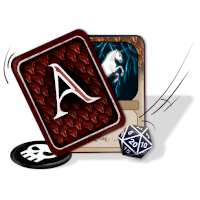 Rovena from the Überwals the born-born witch called. She is a dangerous woman and the cat Alwinja is a companion Animal. In Rovenas witch’s cauldron you are brewing all sorts of Fantastic, such as the invisibility potion that can bring to their fellow human beings in trouble.

The fascinating witch also plays the card game “AVENT Uria” there is an important role when it comes to the selection of powerful heroines. Further details may be found under the following LINK. The Brave can also HEX can…