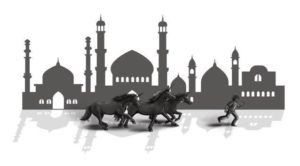 On Tuesday there appeared the first part of the great Interviews for the upcoming Aranien-regional game help for The thorn Empire. In it, the author have authors presented a little bit about your involvement in the overall work of the chit-chat and your favorites in Aranien betrayed.

Now you will learn in the second and the last part, as the Team with the previous publications dealt, how the contributions were matched, what priorities there were and of course there is also the special role of the Matriarchy in the Region.

“ Here it continues with the second part.